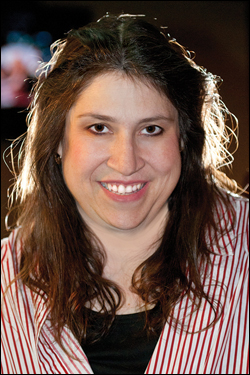 Sheena Metal is an artist, humanist and spiritualist. She has been a talk radio host, at LA Talk Radio for over eight years, helming the daily “Sheena Metal Experience (which Talkers Magazine named one of their prestigious “Frontier Fifty”), and the weekly shows: “Haunted Playground”, “Music Highway” and the brand-new, “Raising The Vibration” (which replaced the controversial, “Two Chicks Talkin’ Politics”, she had hosted, since 2011). She has been behind the microphone, in Los Angeles, for over 22 years, seven of which were spent on the Howard Stern affiliate, KLSX (97.1: The FM Talk Station), where she was the subject of a comprehensive feature in the “Los Angeles Times: Sunday Calendar” and featured in Michael C. Keith's book "Sounds in the Dark", currently in publication with a forward by radio icon, Larry King.

Metal is a recurring host/emcee at the legendary Hollywood Improv “Comedy Carnivale”) and broadcasts her daily LA Talk Radio show from there, quarterly. For nearly a decade, she hosted weekly shows at the world-famous “Laugh Factory” (“Inside the Girls Locker Roon” / “Sheena Metal’s Midnight Madness”), and has performed comedy at the Friars Club, on college campuses and at infamous Comedy Store. She has worked as a panel moderator/on-site interviewer for the “Mid South Paranormal” convention in Louisville, Sedona’s “World Wisdom Days”, in Los Angeles at both the “Action on Film Festival” and “Revive Your Spirit” and at Gay Pride Festivals, around the country.

Metal sits on the Board of Directors for Ensemble Studio Theatre Los Angeles, the Artemis Women in Action Film Festival, the 3…2..1. Artist Collective, the Moreno Valley Cultural Arts Foundation, SIA Organization and works with the Harvey Milk Foundation. Each year, she directs a celebrity charity production of Eve Ensler’s “The Vagina Monologues” with dozens of actresses, all of whom have been guests on her radio shows. Metal is a series regular on the popular “Child of the 70’s” web series, has been featured on “National Enquirer TV”, is an announcer for the Indie Series Awards and recently produced the West Coast Premiere of the parody musical, “A Bad Dream on Elm Avenue”.

She is a regular radio/acting coach for: Actors with Autism, Performing Arts Studio West, Meet The Biz and for Lifeworks’ “Models of Pride” (at both USC and LA’s LGBT Center). She can be seen in Film Lab’s “Amnesia” and “Brad's Untitled Restaurant Project”, the Outfest premiered, “Bruno & Earlene Go To Vegas”, the short film “Point Mugu” (starring Skeet Ulrich) and recently on stage, at the Stella Adler theatre, in “Last Summer at Bluefish Cove”. Metal has a signature candle line, from CBT Candle, called “Experience” and a new candy line, from The Candy Factory, “Sheena’s Supernatural Sweets”. In the Fall of 2016, she founded a global peace movement called, “I Am Raising the Vibration of the Nation (and the World)”, online at: iamraisingthevibration.com.

For more information, contact Sheena Metal at: sheenametalexperience.com and on social media: @SheenaMetal.

Show Description:
The Sheena Metal Experience is definitely not your mother’s talk radio show.  Combining today's hottest celebrity guests and tomorrow's most irreverent headline-makers, the show is raw, uncensored, and all-Sheena-all-the-time. Using her trademark cutting-edge observation, LA entertainment icon Sheena Metal rips the veil off the human sideshow, exposing Homo Sapiens at their most bizarre -- making you wonder how you ever got by without her. It’s talk radio the way it was meant to be, “Sheena-Style”: unscripted, unpredictable, a little horrifying, and a lot hysterical. It may be Sheena’s show but it’s definitely your experience. 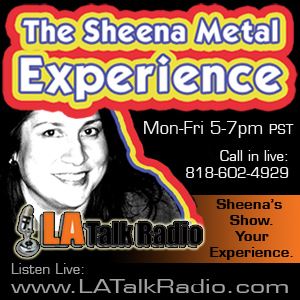