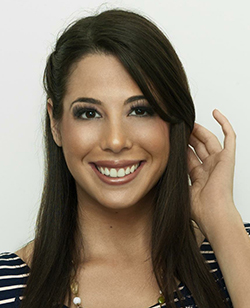 Rachel Wolfson is an LA based comedian with her MA in marketing. If you haven't heard her on "The Budd" Podcast on iTunes or you haven't had a look at her viral memes then you should.

Rachel started on stage in Las Vegas and performed from ages 8-14 with Bob Love's drama and improv for kids and was excited to show her chops in her hometown at LA Comedy Club at the Stratosphere Hotel and Casino.

Rachel has also performed at the World Famous Comedy Store in Hollywood, The Mad House Comedy Club in San Diego, and Flappers Burbank to name a few.

Check her out at the Burbank Comedy Festival Aug 13th-19th.

Yes it's true, her Mom was the Judge who put OJ behind bars. So hopefully neither of them will be listening to Sam and Rachel in the Morning Mon-Fri at 10 AM