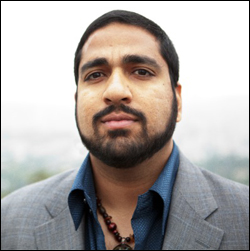 Wake Up Hollywood
The hosts of Wake Up Hollywood Nikhil Korula and Eddie Pence have toured across the country, played to some of the biggest crowds around and know all the right questions to ask these new artists that they hand pick for each week’s show. The best part is none of this radio show is scripted and these guys know what it takes to succeed in the industry and have been good friends for years so you can count on leaving the show with a laugh, a good song or a conversation that will make you think.
Bio:

Classically trained in voice from the age of 5, Nikhil Korula first lent his dulcet tones to sing with the likes of opera giants such as Placido Domingo and pop stars Barry Manilow and the late Luther Vandross. As a boy soprano, Korula performed at Carnegie Hall by the age of 10 and also sang for one of Danny Elfman's first film scores. In 1990, Nikhil Korula performed at the 32nd Annual Grammy® Awards with Mike and the Mechanics, sharing the stage on that fateful night with legends, Ray Charles, Miles Davis & Don Henley to name a few. However, after graduating from the USC Thornton School of Music with a Bachelor's Degree in Operatic Vocal Performance, his creative talents drew him to the intense world of songwriting, jazz and improvisation which led to his playing many acoustic sets throughout Los Angeles. This experience in turn helped him to collaborate with some of the city's finest jazz musicians to form the Nikhil Korula Band (NK Band).

Due to its ever-increasing fan following, this vibrant musical act has traveled all over the globe playing festivals such as BONNAROO (2008 & 2009), PLAYBOY JAZZ FESTIVAL (2011) & SUMMERFEST (2007-2014), gathering worldwide attention one fan at a time. Blending the sounds of calypso, rock, reggae, African and Latin grooves, this unique sextet infuses extraordinary musicianship with irresistible dance jams, a combination that has led the NIKHL KORULA BAND to open for such esteemed artists as Dave Matthews Band, Jason Mraz, John Mayer, The Roots, Erykah Badu, Ben Harper, Ray Lamontagne and countless others while also headlining venues like the House of Blues and performing at the Apollo Theater. With dedicated fans, exceptional live shows, and consistently strong songwriting, the Nikhil Korula Band continues to have a remarkable effect and amazing impact on audiences globally. Please visit www.nkband.com for more information!
grooveinfiniti@hotmail.com