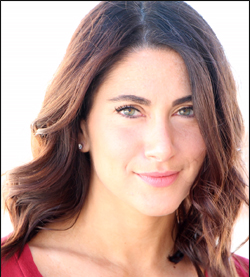 Jenifer Golden is a force both on-camera and off but her success didn’t come easily. She is an inspiration to people, both young and old as she reveals intimate details about her life, being cut off by her parents due to financial hardships, as well as picking up the pieces and not only supporting herself, but living the life she wants...on a budget. As a writer, actress, host and self-professed goof, Jenifer’s blog and online videos have put her on the map as one to watch. Jenifer was born in Miami Beach, Florida. Her love affair with hosting began before she even attended school – interviewing her nanny, as well as characters she would play herself. This began a grade school long career of MC’ing and narrating school shows, and performing in community theater with her parents. After attending Dr. Michael M. Krop High School’s theater magnet program, Jenifer attended the University of Miami, where she received a B.S. in Broadcast Journalism and B.A. in Theater Arts. While in attendance, Jenifer co-anchored UMTV’s Newsvision and covered a number of stories related to the school, news, and entertainment. In addition, Jenifer was a production assistant for NBC’s coverage of the US Presidential Debate, and Dateline special on teens and sex. The Miami-native’s ambition brought her straight to Los Angeles where she joined enrolled in improv classes at The Second City Training Center, performed in the 8-week run of “Me! An Ensemble Comedy,” and graduated from the conservatory. Currently, Jenifer is cohosting and coproducing Two Drunk Girls, and you can watch Jenifer as on-air co-host for The Art of Life on the Lifestyle Network. Jenifer is also the writer and creator of GrowingUpGolden.com where she offers commentary on some of the best deals and budgeting tips around, as well as gives her comedic and sarcastic perspective on life, love and all things fun. Her online videos include featured sketches on Funny or Die, YouTube Buzzfeed.com and CollegeHumor.com. Some of Jenifer’s charity work includes Dogs Without Borders, the Jewish Federation, and the Nancy Davis Foundation for Multiple Sclerosis.