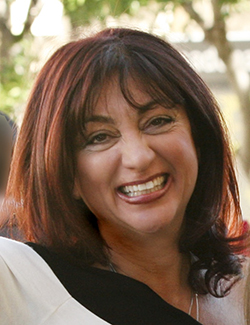 Shari Karney is an incest and rape survivor who advocates internationally for all sexual assault survivors.

A movie has been made about Shari’s life called "Shattered Trust: The Shari Karney Story.”

Shari is the Founder and President of Roar as One, Inc. A non profit whose motto is “Justice for Survivors.”

Website(s):
ShariKarney.com
RoarAs1.org
Show Description:
ROAR with SHARi, is a podcast that speaks to the power of transforming pain into purpose. It’s about helping survivors of sexual assault & abuse find their voices. With the intentions to educate and empower listners to take action. The more we can educate our listners, the more we can empower them to help prevent and protect others from going through what so many women, men and children have gone through.    Shari won't sit in the pain of her own sexual assault & abuse. Enough is enough. Shari has vowed that sexual assault & abuse stops with her experiences. 'ROAR with SHARI' is the voice for voiceless victims, because Shari has been through it; she knows the pain. 'ROAR with SHARI' encourages guests to share their own stories and become part of the movement to end sexual assault and abuse. Shari and guests will help those who have been victimized turn their traumas into triumphs.   The show will guest experts from all fields including: survivors, attorneys, business leaders, activists, organizers, authors, politicians, influencers and celebrities.  Powerful people, speaking for a  powerful purpose.     Be part of the change; Be part of the ACTION!  Roar with Shari, Sundays at 4pm PST on L.A. Talk Radio

Lisa is a rape whistle-blower, social justice activist and advocate, speaker, lobbyist, and woman responsible for the national platform on Court-Ordered Rape.
She is spearheading the passing of the “Court-Ordered Rape” bill across the United States and has tremendous success in bringing this hidden, shameful sexual rape of women to the forefront.
"Court ordered rape is still rape".

Teresa Lancaster, Esq.  Teresa Lancaster is an Attorney and Advocate for victims of childhood sexual abuse who was featured in The Keepers, a seven-part award winning documentary on Netflix. You may know Teresa from the Doe/Roe against Father A. Joseph Maskell case where she sought to expose the sexual abuse which occurred at Archbishop Keough High School while she was a student there. Teresa went on to join SNAP (Survivors Network of those Abused by Priests) where she helped and continues to help other victims of child sexual abuse.

Teresa currently works with Joanne Suder at the Suder Law Firm P.A. in Baltimore, Maryland representing survivors of child sexual abuse and is working on the Hidden Predator Law in Maryland, to extend the Statute of Limitations for child sexual abuse opening a two-year window.

Never give up until you have access to justice as a survivor.

(Once set up):  Find me on your favorite podcast outlet Roar with Shari

Sheri Kurdakul. Female survivor of child rape, and domestic violence survivor. Founder and CEO of Victim’s Voice a mobile app that serves as a digital diary documenting incidents of abuse and violence. The app’s proprietary documentation features enable the victims to produce legally admissible reports to the courts. To buy or get Victims Voice go to VictimsVoice.app.

Take Away: Always document what happened to you and keep it in a safe, secret place.

Take Away: We are more beautiful for having been broken.

ROAR with SHARI, is a podcast that speaks to the power of transforming pain into purpose. It’s about helping survivors of sexual assault & abuse find their voice, with the intentions to help empower all of us to take action and help educated listeners. The more we can educate our listeners, the more we can empower them to help prevent and protect others from going through what so many women and men have gone through. The show is about turning your trauma into triumph. The question we leave our listeners with is: What can you do today…for justice for survivors tomorrow.