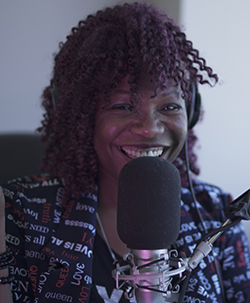 As a United States Army veteran with 15 years of active duty experience, Simply Tee has completed 3 tours overseas, traveled to more than 6 countries, and lived in more than a dozen cities. In 2004, just one year after enlisting, Simply Tee became a staple at the Under 1 Roof bookstore while stationed in Killeen, TX. Here, she joined the Poetry Warriors where she was invited to compete across the state emerging as the 2007 Best Female Slam Poet in Ft. Worth, SpitDat in Austin, and placed in the Ride or Die Slam Competition just before her first  Army deployment.

Show Description:
RECORDS IN LOS ANGELES EVERY MONDAY. SIMPLY TEE POETRY BRINGS AN ENTERTAINING SHOW THAT HIGHLIGHTS UPCOMING & ESTABLISHED POETS & VETERANS WITH STORIES THE WORLD NEEDS TO HEAR. A SHOW CREATED TO SPARK INTEREST & CONVERSATION ON SOCIETAL NORMS, & IN MOST CASES CHALLENGE ITS RELEVANCE AND AGENDA. CATCH A VIBE!